The organ, designed by Lynn Dobson in consultation with chapel organist Arlene Hilding, was built in 1979. At that time, the organ consisted of 19 stops, 21 ranks, and 1,116 pipes, distributed over two manuals and pedal. The organ had mechanical key and stop action, pallet and slider wind chests, and it was voiced on two inches of wind pressure.

The case is constructed of solid white oak with an oiled finish, accented by a black walnut pipe shades and console area, padauk medallions in the doors, and hand carved stop action levers which were also made of padauk. The natural keys were covered with ebony platings and the sharp keys were made of rosewood with ivory caps.

The organ was removed from the old chapel and placed into storage in 1994. It was set up and rebuilt in Dobson’s Lake City, Iowa, workshop during the summer and fall 1995, then reinstalled in the new chapel in February and March 1996. The organ now contains 20 stops, 24 ranks, and 1,200 pipes.

Since the new home of the organ is substantially larger than the 12′-6″ high room it was originally designed for, the organ was given an unobstructed gallery position in the center of the balcony to help sound project in the bigger space. To give it the added necessary height, both for tonal projection and visual impact, the organ was installed on a raised platform.

A new tamboured top was designed along with turnings and new brackets on the cornice molding. The new parts have been stained dark to contrast with the original work, and some of the moldings on the original case have been darkened to tie the new parts to the old.

The task of making the organ fit tonally into a building about five times the cubic volume of the old chapel took special planning. Tonal changes included the addition of new stops to the Pedal and the Great along with renovations of original stops throughout the organ. When the organ was installed the wind pressure was raised from 2″ to 2-5/8″, and the organ was revoiced with higher cut ups and wider flues.

Thanks to these changes, the organ has a stunning visual and aural presence in its new setting. It will undoubtedly enhance and edify the worship life of the Bethany community for many years to come. 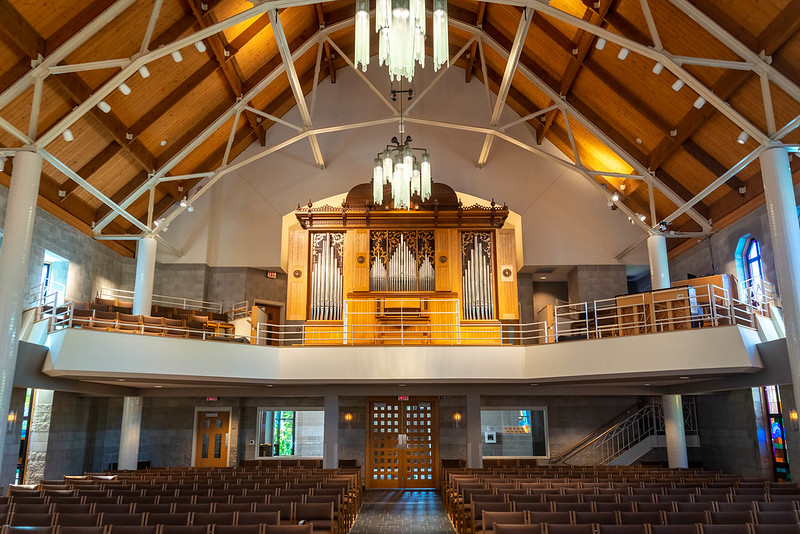