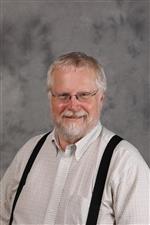 Rev. Mark E. DeGarmeaux is a Professor in the Religion department and an Instruction: Organ in the Music department.

Mark serves Bethany's campus as chapel organist and choir accompanist, and has previously served on boards of Sons of Norway and Minnesota Valley Chorale.

Foods of various cultures. In 2012 I baked 50 different types of raised breads. I try to connect food and culture, making traditional foods on various national days.

I believe in active learning. I try to connect movement with learning when possible. I also believe in the interconnectedness of learning, trying to relate various fields of study with each other.